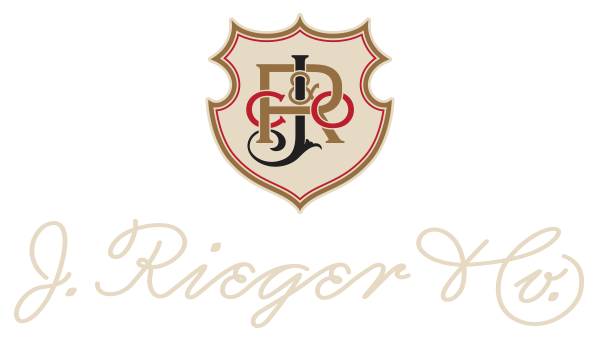 J. Rieger & Co. was the largest mail-order whiskey house in the United States prior to the onset of federal Prohibition in 1920. We are proud to be back as Kansas City, Missouri’s first distillery in nearly a century. This is our story of family legacy, Kansas City history, and the booze that ties it together.

Jacob Rieger immigrated to America from Goritz, Austria/Hungary in 1877 with his wife Mary, son Alexander, and daughter Sallie. When he arrived in America, Jacob’s last name was actually Rizor, but like a lot of immigrants during that time, his last name was changed. After initially settling in Cincinnati, Jacob moved to Kansas City in the early 1880s, where he opened a grocery store.

The only known photo of Jacob Rieger, taken in the early 1900s.

THE WETTEST BLOCK IN THE WORLD

By 1887, Jacob was on to his newest business venture: making booze. Jacob founded J. Rieger & Co. at 1529 Genesee Street in Kansas City’s West Bottoms neighborhood, directly across from the Livestock Exchange Building. As the home of the Livestock Exchange and Union Depot (the original train station), the West Bottoms was the central hub of KC at the time. The neighborhood sits on the Missouri/Kansas state line and since Kansas enacted statewide Prohibition in 1881 (39 years before Federal Prohibition), the area was home to many saloons, brothels, casinos, liquor retailers, etc. that were patronized by residents from both sides of the state line. Because of all the booze that flowed there, the area became known as the ‘Wettest Block in the World’.

THE RIEGER HOTEL AND THE BOOZE THAT BUILT IT

Around 1900, 13 years after founding J. Rieger & Co., Jacob turned over operations to his only son, Alexander Rieger. Alexander was a savvy businessman who was able to grow the family business by offering mail-order services for its products, including gifts with your purchase such as corkscrews and shot glasses to accompany grandiose marketing claims such as “Best on Earth” and “O! So Good!”. During Alexander’s time in charge, J. Rieger & Co. claimed to be the largest mail-order whiskey house in the country, boasting a customer base of 250,000+! The company offered over 100 unique products ranging from whiskeys, to gins, to rums, to stomach bitters, and even one product just named “alcohol” which we imagine was not for the faint of heart.
‍
How Alexander reached customers all of the country was through mailing beautiful advertisements with a pricelist on the back- or in today’s terms, spam mail. Recipients would fill out their order form at their home, place it in an envelope with the amount of money due, and mail it to J. Rieger & Co who would then fulfill the orders and ship liquor all over the country. Needless to say, things were quite different back then. In 1914, due to frequent flooding, one of the distillery’s neighbors, the original Union Station of Kansas City (known then as the Union Depot), moved to where we know Union Station to be today. To serve incoming travelers and to increase brand exposure for the distillery, Alexander Rieger built the Rieger Hotel in 1915 at the corner of 20th and Main Street, just a few blocks North of the new Union Station. The hotel was one of the first “budget hotels”, meant to accommodate traveling businessmen and cater to individuals that could not afford the luxurious hotels that were prevalent at that time. A mural on the South side of the building of a bottle of Rieger’s Monogram Whiskey was commissioned by Alexander when the hotel first opened.

J. Rieger & Co. continued to thrive until the 18th Amendment was passed in 1919 which would make illegal the production, sale and transport of intoxicating liquors. Alexander faced a forced shutdown effective January 1, 1920. In December 1919, just like so many breweries and distilleries across the country, Alexander reluctantly shut the doors of J. Rieger & Co.
‍
The Rieger family sold The Rieger Hotel shortly after Prohibition began. The building subsequently changed hands and names many times over the years, but retained the name “Rieger” carved in marble on the very top of the building. Shortly after closing J. Rieger & Co., Alexander Rieger and his son Nathan opened a bank named the Home Trust Co. in Kansas City. Sometime around the 1950s, the original J. Rieger & Co. building was unfortunately razed to make way for a parking lot. The Rieger family stayed in the banking business for many years, an industry that continued to run in the family’s blood until the 1980s, the same decade Andy Rieger, Jacob Rieger’s great-great-great grandson, was born in Kansas City.

It wasn’t until April 2010, 90 years after the onset of Prohibition, that the idea for bringing back the historic distillery was dreamed up by Ryan Maybee, a Kansas City bartender who opened his bar Manifesto in the basement of the Rieger Hotel building the year prior. Fascinated by the history of the building, Ryan discovered its connection to the historic J. Rieger & Co. distillery and from that point, was dead set on ensuring it was resurrected. In December 2010, Ryan partnered with Chef Howard Hanna to open a new restaurant, aptly named The Rieger, on the main floor of the Rieger Hotel building. On opening night, Andy Rieger, who was at the time the only living “Rieger” of Jacob’s bloodline, walked in to meet the owners and thank them for honoring his family’s name through their restaurant. While Andy and Ryan’s accounts of what happened next vary, what they both agree on is that after a brief introduction, Ryan casually said to Andy, “We should bring back the old distillery.”

Over the next couple years, while living in Dallas and working in the financial industry, Andy stayed in touch with Ryan and helped him develop his business plan for the distillery. The original trademark was purchased (last owned by Alexander Rieger and expired in 1922), and the two partnered with Kansas City creative agency Liquid 9 to develop the modern J. Rieger & Co. brand using the distillery’s original name, logo, slogan (O! So Good!), and original bottles as inspiration. Along the way, Andy and Ryan met Paul Gronquist, a collector of pre-prohibition whiskey memorabilia, who owned nearly 100 pieces of original J. Rieger & Co. memorabilia. His collection of old bottles, labels, mailers, order forms, and marketing materials have been vital in helping re-tell the story of J. Rieger & Co.’s origin.

It wasn’t until 2014, under the guidance of industry veteran Dave Pickerell, that the plan fully came to fruition, driving Andy to quit his job in Dallas and move back to KC to dive fully into the distillery. After securing a building in the historic East Bottoms neighborhood of Kansas City and following months of product formulation, the relaunch was ready. By October 2014, nearly four years after first meeting, Andy and Ryan had successfully relaunched the brand with the release of Rieger’s Kansas City Whiskey.

Because J. Rieger & Co. was historically a Whiskey-focused company, Andy and Ryan wanted a Whiskey to be the first product. In doing extensive research on the styles and methods of production for American Whiskey in the 1880s, we learned that using Sherry as a blending agent was a common practice. While a plan was in place to build a fully-functioning distillery to make whiskeys in-house, our first release would become a blend of some of the best barrels we could find. Sourcing Corn Whiskey as well as Straight Rye Whiskey, we selected a 15 year Oloroso Sherry from the Williams & Humbert Bodega out of Jerez de la Frontera, Spain, thanks to our good friend and advisor Steve Olson, to add to the blend. After many months of recipe development and legal hurdles, on October 30, 2014, Kansas City Whiskey was formally launched at the 100-year anniversary celebration of the opening of Union Station, a fitting tie to our historical legacy. Kansas City Whiskey quickly garnered national attention, being named in the Top 4 for International Best New Spirit or Cocktail Ingredient at the 2015 Tales of the Cocktail Spirited Awards.

A few months after the release of Kansas City Whiskey, Head Distiller Nathan Perry joined the team to learn under the mentorship of Dave Pickerell. By May of 2015, our 750-gallon copper Vendome still became operational, and daily fermentation and distillation began. From there, we’ve been able to expand our product offering first with Premium Wheat Vodka in 2015. In July 2015, legendary gin master distiller Tom Nichol became a partner in J. Rieger & Co. and helped us develop Midwestern Dry Gin while teaching Nathan and the team of Assistant Distillers the tricks of distilling Gin in the classic London Dry Style. In 2016, we added a Caffè Amaro, a first of its kind bittersweet coffee liqueur to our lineup.

In 2021 our earliest barrels turned 6 years old and were finally ready for bottling. On August 16, 2021 we released Rieger’s Bottled in Bond Straight Rye Whiskey, the first whiskey distilled in Kansas City since Prohibition. The following summer our first Bottled in Bond Straight Bourbon was released in June 2022 also after 6 years of aging.
‍
With the goal of reestablishing J. Rieger & Co. as one of the finest Whiskey producers in the country, our annual barrel production has increased every year since we began distilling in 2015. Today we are distilling more than 1,200 barrels of Rye and Bourbon Whiskey annually that are all allowed to age for a minimum of 4 years in our rickhouse.

We are deeply appreciative of the opportunity to share our history and our products with the world and look forward to continually honoring Jacob’s legacy in everything we do. Thank you for being part of the Rieger family.